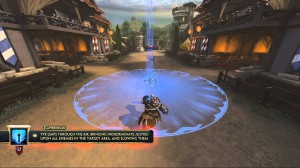 The front-end user interface has undergone major changes. All screens in the front-end UI have been modified.
Context Pinging changed from VQ… to a new targeter system. Pressing V will now bring up a targeter. If left-mouse button is pressed, the location is pinged on the map. Using the targeter while in various sub-menus will change the targeter to a specific type and create a marker in the world for teammates to see.
The character cards on the loading screen now show your God Rank and overall Mastery Level for all users. Gold Cards also show Wins, Kills and Assists.
The mini-map now shows when you have a buff on the ground.
Right-mouse button will exit the VGS menu.
Various ability ground targeters are now visible through walls for easier placement.
Joust Challenge matches now use the respawn times used in 3v3 Joust, versus the shorter 1v1 Joust timers.
Several character cards have been updated for improved artistic presentation.
Various animation polish passes for stuns.
Simple shadows (decals) now appear when on Medium Shadow detail.
A variety of technical changes have been made to the AI system used by NPC..
The tutorial has undergone various changes and now features Neith (previously Ra).
A bug was fixed with the animation of Furies when stunned.
Fixed an issue in which players the camera would go “inside” a players’ mesh.
The new god rotation is Ao Kuang, Hades, Kali, Ne Zha and Xbalanque.

UI has undergone some changes (more complete rework planned for a later patch).

This item has changed to the following:

Price – 3100g
+100 Magical Power
+300 Health
PASSIVE – When a god takes damage from your abilities, they take 15% of their maximum health in additional damage. If multiple gods are hit, the damage is applied to the one with the greatest maximum health. This can only occur once every 60 seconds.

When a player is teleporting to a tower, there is now a better visual indication at the tower during the channeling time that the player is incoming .

The spiders are now correctly dealing physical damage instead of magical damage.

The buff provided from the drunk state has changed from +5/15 Physical Power to +10/30 Magical Power.

The buff provided by the ultimate has been changed from physical power to magical power.

Fixed an issue with Bakasura’s digestive system where he was not correctly regurgitating the large furies.
The projectile now arcs higher and flies slightly faster, decreasing the delay on when it is deployed.

The bite will no longer deal damage to the Fire Giant, Gold Fury or Minotaur.

The magical power contribution has been reduced from 20% to 15%.
The +10% magical lifesteal buff on this ability has been removed.

Freya’s recommended items have been updated to reflect her change to all magical based basic attacks.

This ability now gives her and her allies 20% movement speed for 6s at all ranks.

Hun Batz now gives a voice cue when he uses this ability.

This aiming on this ability is no longer affected by Bacchus’ Intoxicate. You will continue to fire in the direction you were aiming when you fired.

Some abilities have seen FX improvements.